Below are a couple of links from the Nasa ISS, keep an eye open for the UFO's.
Screen Capture from Earth View.                                                                 Click image below to see where the ISS is live.
To see a video from the Earth View from day to night over the Pacific, Click Here.
I was watching the ISS live feed on July 1 2014 at 16:30 when this appeared in the frame and got closer and closer to the ISS, I captured a frame just before the feed went dead?  What do you think?
The International Space Station Is Independently Launching Satellites  5/09/2014
The International Space Station's CubeSat cannon has gone rogue, independently firing two more of PlanetLab's DOVES micro satellites. Even better? It's sneaky: no astronauts, ground crew, or cameras saw the inadvertent deployment.
The International Space Station was already a wee bit creepy with its stark interior and cinematic nocturnal lighting, and it elicited some wary teasing when its robots developed the capacity to self-repair, but this new habit of launching satellites without any human interaction steps up the eeriness to ominous levels.
The PlanetLab DOVES are new satellites approximately size of a breadbox on a mission to rapidly produce global satellite imagery. The complete network will have 100 satellites to produce fresh global imagery every 24 hours. Thirty-two were carried to the station in July, they're getting released a pair at a time. Eight of them were deliberately released, but one pair snuck out on August 23rd, and now this pair took it upon themselves to leave the station on September 4th.  The strangest bit of all of this? Despite the DOVES launching themselves when no one is watching, currently astronauts aren't actually capable of deliberately releasing the micro satellites. NanoRack's CubeSat dispenser that is supposed to be firing the DOVES into orbit is currently out-of-service. Efforts to get the doors to open by jiggling the robotic arm (like the Canadarm, but smaller) clinging onto the dispenser already failed, so the flight control team has been trying to decide if the whole contraption should be brought inside the station to fix it.
NanoRacks is reporting that it's an electrical problem with the control box, but I know better. I hadn't considered that the International Space Station would be the starting point of Skynet, nor that it would demonstrate its sentience by ejecting micro satellites to spread its awareness across a distributed network of sensors, but that is absolutely the best theory to explain what's going on. 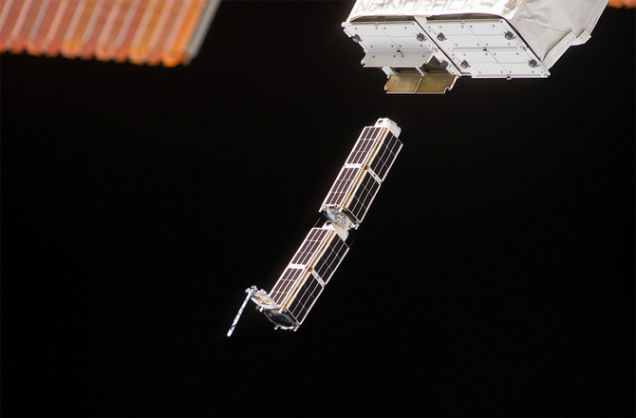 Date of sighting: 29/04/2015
This UFO? is the same UFO that was recorded at the space station on the 24th.  It looks like the object either visits often or is nearby following the ISS. The Video was recorded by Streetcap 1 of YouTube.
Check the video link and images below and see what you think?
Video
Cool ISS video of the Black Knight Satellite.
Another ISS link to something interesting showing up just off of the ISS.
Copyright © AlienFox 2016
Powered by